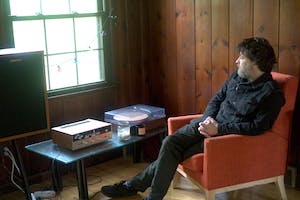 Twitter
Email
With Companion Rises, Ben Chasny has created a Sci-Folk record that feels totally in the right place welcoming in the new decade.

Six Organs of Admittance is back after 3 years with a new record, new techniques in sound generation, and a new attitude. Companion Rises has a driving force only hinted at with previous releases. Manipulating the rhythmic DNA from songs such as the bass-dominated “Taken by Ascent” (on his last record, Burning the Threshold), Ben Chasny has grown a new sound creature in his lab that is as welcoming as it is terrifying and as fun to listen to as it provocative and intriguing.