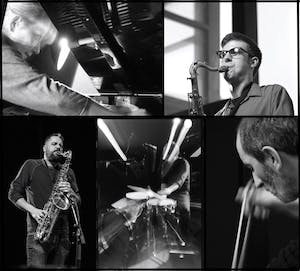 Opening set will be played by a trio:

In the beginning was free music. And a taste for adventure. If you've ever wondered how a new team of improvising musicians actually stabilizes, even though they've decided to work in instability, this one if for you. Here is an international quintet that intends to dedicate and devote itself to free, total and collective improvisation, and that has very serious reasons for doing so. One of them would be that Keefe Jackson, Dave Rempis, Christine Wodraska, Didier Lasserre and Peter Orins have answered the call of The Bridge, a transatlantic network that connects improvisers from here and there, from France and the United States, in the form of formations that are always mixed, always hybrid, always phenomenal. Another reason, not the least, is that for these five musicians improvisation is a method and a philosophy.

When the music is strictly the result of direct actions, reactions and interactions(interferences) between the players, without the mediation of a leader (an authority), a score or a structure (a law), only the forces at work and the collective creation, always fluctuating, to which they incessantly end up according to their transactions in situ and in real time, count. Here and now. The internal functioning, the functional agility, of such a group of individuals, at once mobile, tactical and operational, certainly has political resonances, evoking for example the concept of swarm intelligence put forward by Michael Hardt and Antonio Negri: one distinguishes oneself by testing, soliciting and upsetting one another, by positive or negative reciprocity, from consensus to dissensus and back, by playing with all the power relations between a plurality of subjects recognized as such. We also play with the distribution of roles and functions by exercising a critical spirit and a creative imagination that is justly overflowing: we invent and adjust, construct, deconstruct and reconstruct together and permanently, in a dialogical, antiphonic or polyphonic way...

If you still doubt that it is a method and a philosophy among these improvisers, listen to Didier Lasserre for whom such adventures give "the opportunity to experience the very possibility of encounter (musical, social, human) in a marked, identified aesthetic (the free - in the broadest sense - from its American roots to its European diversions): how can you be yourself and, through this encounter, how can you escape yourself as well (in the words of Barre Philips, “try to widen the circle”).” Keefe Jackson comes back to the very idea of being strangers to one another: “If we are improvisers and feel concerned by the acts of presence we make at each moment, to answer questions like "Who am I?" or "Who are they?" will not help us make music. Improvising with strangers can be very stimulating in itself: it is easier to avoid expectations, familiar paths that distract us from what is really happening. It can even help us find a way to the proverbial and coveted clean slate, which is also timeless.” Dave Rempis reminds us that these encounters are always unique because “everyone has an approach as distinctive as their fingerprint. Working with as many improvisers as possible gives you a better understanding of musical solutions and possibilities, and forces your own language to expand into new areas of discovery.”

If group interaction constitutes the structure of music, then it is the members of that group, the five forces at work, who can best tell us what lies ahead at the turning point. Dave Rempis and Keefe Jackson are both Chicagoans by adoption, and they have frequently worked together in multiple ensembles. Rempis came to town in 1993, having trained as an ethnomusicologist in Ghana, where his Percussion Quartet, with its stormy saxophones blowing on the embers of unbearable rhythms. But it was within the Vandermark 5 that he first made a name for himself, before embarking on his own projects such as The Engines, Ballister or the trio he currently forms with Joshua Abrams and Avreeayl Ra, not to mention his involvement as a concert organizer, in this line of activist musicians of which Chicago is proud. The latter arrived in the city in 2001, and almost immediately brought his rigorous and invigorating tenor to the attention of the entire Windy City filibusters' scene, from Jeb Bishop to Jason Adasiewicz, and Mike Reed to Tomeka Reid. He can be heard reasoning and fooling around in the Fast Citizens, an orchestra whose members take turns leading its big band Project and Likely So, a septet of saxophonists and clarinetists from the Midwest and Central Europe resulting from the Chicago Luzern Exchange program. Another Bridge... On the other side, in Toulouse and elsewhere, Christine Wodraska has made the piano a wild land that can be explored but not colonized. All those who went on an expedition with her (the list is as long as her incredibly confidential fame: Sophie Agnel, Raymond Boni, Jean-Luc Cappozzo, Jacques Di Donato, Hamid Drake, Jean-Yves Evrard, Fred Frith, Gerry Hemingway, Daunik Lazro, Joëlle Léandre, Paul Lovens, Ramon Lopez, Jean-Marc Montera, Ivo Perelman, Didier Petit, Bernard Santacruz, Fred Van Hove....) still remember an implacable experience. As for Didier Lasserre and Peter Orins, on the Bordeaux and Lille sides, if they play together within Trouble Kaze, it is also because they attract each other like opposites: The presence of one is sometimes barely felt, so much are the lines of tension he works with extraordinary contractions and growths, as his partners Beñat Achiary, Jean-Luc Cappozzo or Jean-Luc Guionnet, or the members of the austere and burning trio he forms with Daunik Lazro and Benjamin Duboc, among many others, have seen. In comparison, Peter Orins excels at twisting and untwisting rhythms with Toc, a progressive free-rock formation, as with the Franco- Vietnamese (Hué/Circum) or Franco-Japanese (Kaze) projects in which he participates. Other Bridges... As far as Chicago, where his path has already crossed that of Keefe Jackson and Dave Rempis. Like Dave Rempis, Orins is as active as he is an activist, head of several Lille hydras, including the Circum, Crime and Muzzix orchestras and collectives. That’s it for the introductions. All that's left to do now is to start the debates and let yourself be carried away or carried away... 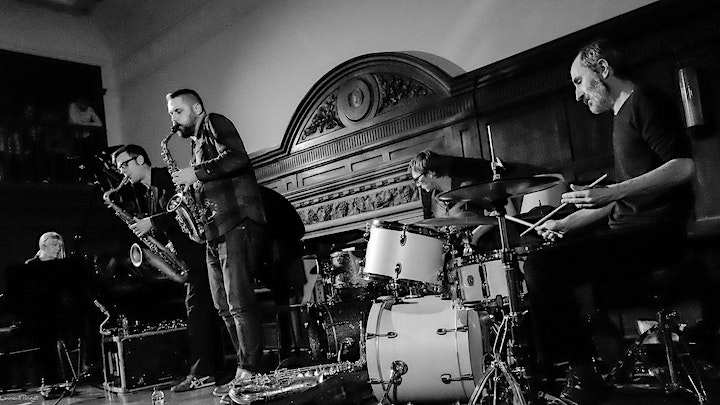