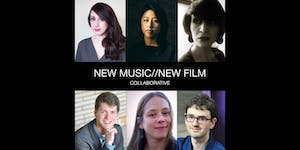 The goal of New Music//New Film Collaborative was to create new musical works and pair them with amazing video art. Mary Kouyoumdjian, David Clay Mettens, Daniel Pesca, Leaha Maria Villarreal and Kirsten Volness each wrote pieces that included cello, which then became the basis for five videos created by XUAN. A frequent collaborator with musicians (and a trained musician herself), has produced five videos in response to the five new compositions, which will be posted online with the recorded audio of each piece. On December 8, these videos will be projected alongside live performances of these pieces.

For Audrey, by Mary Kouyoumdjian

Rabbit in the Moon, by Kirsten Volness

performed by Audrey on cello and Daniel Pesca on piano