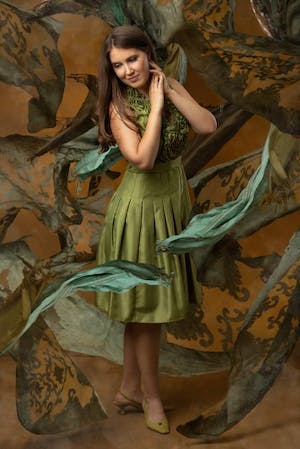 Lara Driscoll is a French-American pianist, composer, and educator known for her “captivating style and uncluttered finesse” (COCO Jazz CKVL FM Montreal) and her “magical touch...musical solos” (All About Jazz) For Chicago-based Lara Driscoll, Woven Dreams is both a beginning and an end. It’s her first album as a leader, and as such will serve to introduce jazz listeners to her warm, expressive playing and quietly ingenious compositions. At the same time, Woven Dreams memorializes the trio that she led while a graduate student at Montréal’s McGill University, as well as her time in the Francophone city.

“I kind of fell into living in Montréal, which was honestly an amazing thing,” she says. “To experience the way that Montréalers think about music, which is a very interesting combination of European and North American sensibilities.” The child of an American father and French mother, Montréal’s bilingual and creative scene seemed a logical locale to enrich her musical career.