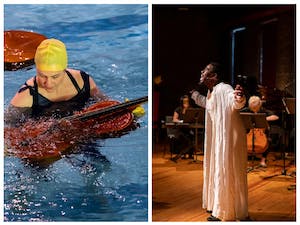 Nathan Davis is a leading composer of our time. His works have been premiered at the Donaueschinger Musiktage, BAM Next Wave Festival, Lincoln Center and Tanglewood. Inspired by Davis’ research into clay pots in hidden vaults of medieval churches amplifying specific frequencies, Kleijn will activate multiple guitar amps acting as live resonators in his work Caveau Phonocamptique for cello and electronics.

Aliya Ultan is an upcoming young composer, improviser, singer, and cellist with a passion for circus arts, physical theater, and dance. In her world premiere Residuum for Cello and 600 feet of Mylar, Kleijn will expose the hidden resonance of these materials while weaving them together resulting in a massive knot of noise.

Damon Locks of Black Monument Ensemble is a musician, educator, visual artist and a fixture on the Chicago underground scene. His new work initiates opportunities for Kleijn to respond to text and sounds created and curated by Locks.

Julian Terrell Otis is a genre defying musician dedicated to the advancement of Black Music in America. The utilization of the operatic voice brings new perspective to the creative music, jazz, commercial, and contemporary classical worlds. Otis performed Julius Eastman’s “Prelude to the Holy Presence of Joan of Arc” on the 2018 Frequency Festival. Tonight he premieres Anthony R. Green’s “Empathy I: Diamond Reynolds,” which he calls “an opportunity to process the inner emotional life of Reynolds’ witness to the death of her boyfriend Philando Castille.”