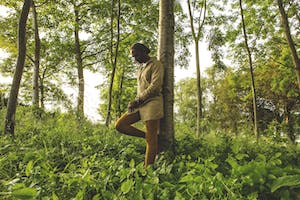 Junius Paul, composer, bandleader & acoustic and electric bassist, born in Chicago and raised in the Chicago area, is a graduate of St. Xavier University (Chicago). Junius' debut album, “Ism”, was released in November 2019 via International Anthem Recording Company. Ism opens audaciously with the spiritual mic-check “You Are Free To Choose,” a track that features Junius Paul alongside Vincent Davis (drums), Justin Dillard (piano), and Corey Wilkes (horns). As Junius pushes forward as a creative musician, he is careful to carry with him the spirit and the knowledge he’s gathered from those who have come before him. He is very literally a bridge between generations of the Chicago vanguard, currently playing in Makaya McCraven’s band and in the Art Ensemble of Chicago.