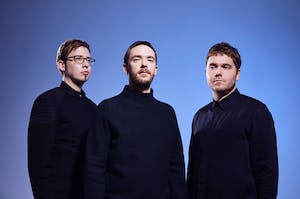 GoGo Penguin have been hailed as hailed as the “Radiohead of British Jazz”, but they draw equally on rock, jazz and minimalist influences, alongside the intricacy of Aphex Twin or Four Tet to create their punchy, experimental, but always beautiful music.

They appear here playing music from their new album, simply titled GoGo Penguin, out May 1 on Blue Note Records. It’s a bold, adventurous album revealing a band at the very top of their game. Expect junglist rhythms, beautiful melodies and thunderous sub-bass from one of the finest live bands in the world.

GoGo Penguin’s 2014 album v2.0 (Gondwana Records) was named a Mercury Prize album of the year alongside albums from Damon Albarn, Young Fathers and Jungle. In 2015 they signed to Blue Note Records and released the albums Man Made Object in 2016 and A Humdrum Star in 2018. Their EP, Ocean in a Drop (Music for Film) was released in October 2019 and their new album GoGo Penguin will be released on May 1 2020.

“the Radiohead of British jazz” (Line of Best Fit)