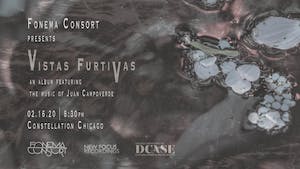 Twitter
Email
Fonema Consort celebrates the release of its new album "Vistas Furtivas," focusing on the music of Juan Campoverde

After six years of close collaboration with Ecuadorian composer based in Chicago Juan Campoverde, Fonema Consort is proud and thrilled to release an album under New Focus Recordings portraying his music featuring the voice and the guitar. In Fonema’s founding soprano Nina Dante’s words, “the music of Juan Campoverde is full of deep, secretive, and lush magic. It sings of a profound worshipfulness, and all that is ceremonial and reverent in the natural world and human emotion. In his music, we hear the water and creatures and stones and stars. We hear the cries of the heart in all its complexity.” The program in this album release concert is comprised of selections from the album, including the world premiere of "Umbrales II" (a sibling work to the Campoverde’s first piece composed for Fonema in 2013); and his music is complemented by similarly haunting works by Mexican Iván Sparrow, and the late Argentinian Graciela Paraskevaídis, who was a powerful artistic and intellectual force in the shaping of South American musical aesthetics of the past decades.