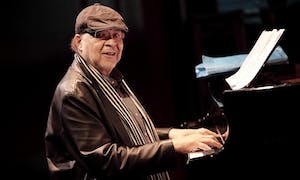 Since the mid-'60s, pianist Dave Burrell has been a quality sideman on a number of free jazz recordings led by the likes of Archie Shepp, Pharoah Sanders, and Marion Brown. Burrell's voice combines the entire history of jazz from Dixieland to free, though it is as an inside/outside player that he most excels. His is a percussive, syncopated style, well suited to the heavily rhythmic concept favored by one of Burrell's steadiest employers, tenorist David Murray.

Burrell was born in Connecticut, but grew up in Hawaii. Both of his parents sang. According to W. Royal Stokes, his mother was once asked to join the Delta Rhythm Boys; it was a visit to the family home by singer Herb Jeffries that first interested Burrell in jazz. As a teenager, Burrell played in the requisite rock & roll band. He attended the University of Hawaii from 1958-1960 before eventually getting his degree in 1965 from Boston's Berklee School of Music. While at Berklee, he played with Tony Williams and Sam Rivers. After graduation, Burrell moved to New York, where he formed a group with saxophonist Byard Lancaster, bassist Sirone, and drummer Bobby Kapp, called the Untraditional Jazz Improvisational Team. Burrell also fell in with Marion Brown and Grachan Moncur, recording with the former in 1966 and the latter in 1969. In 1968, Burrell co-founded the 360 Degree Music Experience with Moncur and drummer Beaver Harris. In 1969, he traveled to Algiers, where he participated in a Pan-African Festival. That year, he also taught in Harlem for the Community Thing Organization.

Burrell recorded with Sanders, Shepp, Alan Silva, and Sunny Murray at various times in the late '60s and early '70s. In the late '70s, Burrell wrote that rarest of musical works, a jazz opera. Entitled Windward Passages, Burrell recorded portions of the work as a soloist in 1979. In the '80s and '90s, Burrell formed a fruitful association with Murray, with whose octet and quartet he would record on a number of occasions. The two recorded in duo as well, notably including the 1997 Black Saint release Windward Passages, which featured Burrell's wife, singer Monika Larsson, on some tracks. During the 2000s Burrell recorded as leader for a variety of labels; his albums included Recital (a duo recording with bassist Tyrone Brown, CIMP, 2001), Expansion (a live album by Burrell's Full-Blown Trio featuring bassist William Parker and drummer Andrew Cyrille, High Two, 2004), Margy Pargy (a solo piano recording on Splasch, 2005), Consequences (a live duo set with drummer Billy Martin of Medeski, Martin & Wood, Amulet, 2006), and Momentum (a trio date with bassist Michael Formanek and drummer Guillermo E. Brown, High Two, 2006).