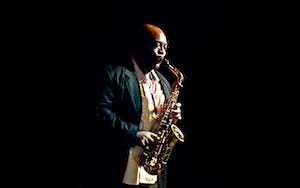 Twitter
Email
“The most visceral and distinctive alto saxophonist of this era.” –The New York Times

Over the past decade, Darius Jones has created a recognizable voice as a critically acclaimed saxophonist and composer by embracing individuality and innovation in the tradition of African-American music. “Jones' concept is proudly his own,” writes Philip Clark in The Wire. [His music] poses big questions about the relationship between the African-American tradition of spirituals, blues and gospel, and now." With New York City as his base since 2005, Jones has brought his unique sound to dozens of cities around the United States, Canada and Europe.

Of note, Jones was featured in the Wall Street Journal and BBC's Jazz on 3 in 2011. In 2012 he was featured in the New York City Jazz Record, JazzTimes.com, the Village Voice Blog, DownBeat, and on WBGO's The Checkout. Darius was featured on the cover of Portuguese magazine, Jazz.pt in 2012, and on the cover of Italian magazine, Jazz Colours, in 2013. Darius' 2012 release, Book of Mæ'bul (Another Kind of Sunrise) was listed among NPR's Best Top 10 Jazz Albums of that year.