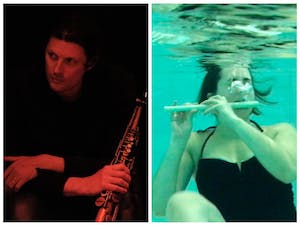 "In 2014, I left a residency at the Electronic Music Studios in Stockholm with a lot of the little fragments of sound sampled from their Serge and Buchla synthesizers. Mostly feedback snippets these little pieces eventually formed part of the material and the conceptual basis for Object (transparent grid). I wanted something that could be developed over some years and also something modular that could be performed in various formations. Some of the pieces have had parts for small ensembles, there is one entirely acoustic version, and even a book of images, but, for the most part, the concepts run together and I now think of the collected pieces as one composition that can be performed solo or with other musicians. The composer and cultural researcher, Jordan Topiel Paul, writes of the most recent recording with Catherine Lamb on viola: “Object is a series of sonic fragments, at first seemingly unrelated materially and structurally, yet obstinately part of the same composite. As though you were an extraterrestrial, encountering for the first time a terrestrial body-- maybe a grape vine or an automobile-- and trying to decipher the dubious kinship of its parts. How things fit together or don't... elements variously solid, yielding, drippy. What do you do with the discrepancies in presence and distance? And the relaxed yet relentless occurrence of events? At times there's just enough time to wrap your faculties around a texture, following a sinewy wooden twist or a small expanse of chromed smoothness. But then the irregularity of surface-- of rhythm-- jostles your attention like a skipping scratched CD. When it's over you ask yourself: Did music happen? "

Coming Up for Air explores the creative possibilities that emerge when pieces are limited to the performance of a single breath. Initially formed as Kathryn's personal response to recovering from chronic respiratory conditions, the project invites composers to consider their own relationship to breath and the body's role in performance. The collection currently contains over 100 single-breath pieces and celebrates its inclusivity of composers of diverse ages, experience, and background.

"A catalogue of inventive ideas, delivered with singular wit and dedication" (Robert Barry, The Quietus).