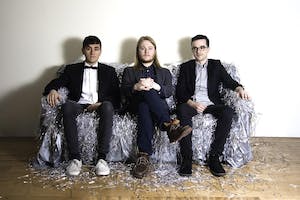 Described by the New Yorker as one of the ‘vital institutions’ of the NYC contemporary music scene, Bearthoven will present two of their most substantial commissions to date in their Chicago debut at Constellation on February 20. The piano / bass / percussion trio’s program features Mixed Tulips, a blistering new amplified work by Bang on a Can co-founder Michael Gordon, alongside Sarah Hennies’s subdued, otherworldly Spectral Malsconcities, which was composed for Bearthoven in 2018.

“Bearthoven is not just a piano, a bass and some drums — it seems greater than the sum of its parts; a kind of chameleon that is both the subject and the object of the creative process, a synergistic unit that informs and becomes the art that is created at its behest.”- ICAREIFYOULISTEN (Cristian Kriegeskotte)