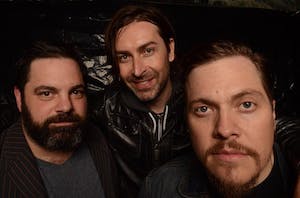 The members of Alpha Consumer have played music with Bon Iver, The National, Jenny Lewis, John Prine, Arcade Fire, Big Red Machine, Andrew Bird, Tortoise, The Notwist, The Lone Bellow, Bruce Hornsby, Anais Mitchell, the Tallest Man on Earth, The Suburbs, Sandra Bernhard, Hiss Golden Messenger, Bonny Light Horsemen, Phil Cook, Damo Suzuki, Mouse on Mars, Brother Ali, Eyedea, Swamp Dogg, Joe Lovano, Tim Berne, John Medeski, Steve Cropper, Vernon Reid, Mark Guiliana, Tony Malaby, David King, Shazad Ismaily, Ethan Iverson, Craig Taborn, Anthony Cox, Ron Miles, Evan Parker, Reid Anderson, members of Prince's New Power Generation, and probably some other folks they can't think of at the moment. There was this one time that some members of Alpha Consumer played the music of Ornette Coleman for Ornette Coleman at the Walker Art Center on his birthday... that was pretty cool. The members of Alpha Consumer have played music on 6 continents at countless storied venues, and on Saturday Night Live, the Tonight Shows with Conan and Jay Leno, Letterman, Fallon, Colbert, Ellen, Later with Jools Holland, and the Late Late show with Craig Ferguson. Nevertheless, the most rewarding music the members of Alpha Consumer have played in the last 20 years or so has often been their own, and they will continue to make time for that till the wheels come off.

Since forming in 2012 Chicago’s Twin Talk has steadily drifted from the conventions of the saxophone trio. While reedist Dustin Laurenzi, bassist-singer Katie Ernst, and drummer Andrew Green are deeply rooted in jazz tradition, they’ve spent their time on the band stage together making their music more elastic, spontaneous, and open, embracing new inspirations without stifling the improvisational heart of their work. All three musicians are active members in the city’s bustling jazz community, each playing in numerous working bands, but they’ve found a true collective voice as Twin Talk. They’ve used live performances as opportunities to stretch—expanding on composed material and ditching set lists in favor of calling tunes on the fly—but on their upcoming album Weaver they’ve pushed themselves further than ever, using the recording studio as a place for experimentation, letting a new batch of compositions develop and take new shapes. As critic Howard Reich wrote recently in the Chicago Tribune, “These musicians listen keenly to one another, and with a sensitivity that only comes from familiarity and trust.”

"Twin Talk have made a bold musical statement, and it's one that will likely cause the serious (or even casual) jazz fan to take notice." - PopMatters