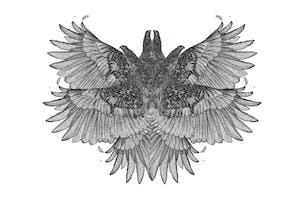 "Do not touch me, memory" w/ Nina Dante, Dalia Chin, and Alexandra Desipris

Do not touch me, memory is an interdisciplinary, immersive performance created by the Dante+Chin Duo (voice and flute) and visual artist Alexandra Desipris. Using bone flutes, voices, percussive jewelry, three painted narrative scrolls, costuming, staging, the artists will bring to life the story of a Neolithic tomb in which humans and sea-eagles have been bound in death for over 5,000 years.

The Isbister Cairn, also known as the Tomb of the Eagles, is a Neolithic tomb on the Orkney Islands that was in use for over 800 years. It is replete with mystery: along with the bones of at least 342 human individuals were found the bones of countless white-tailed sea-eagles, a raptor that nested in the cliffs upon which the tomb was built. The bones of the eagles were found buried in the very foundations of the building, as well as nestled among human bones like talismans. Scientists believe that the sea-eagle was taken as a tribal totem by the people who used the tomb, which would have influenced their name, dress, and traditions.

Do not touch me, memory tells the story of this incredible tomb through visual art and music; as well as telling a larger story of the sacred interconnectedness of humanity and nature. It is the artists’s hope that this work functions as artistic medicine to support humanity’s current efforts to regain balance with our environment.